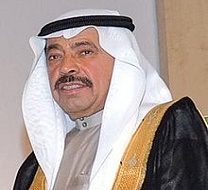 Mr. Abdul Aziz Saud Al-Babtain was born in Kuwait in 1936. He is a prominent and well known Kuwaiti poet and businessman in Kuwait, the Gulf area and the Arab world. He published his first book of verse Bauhel-Bawadi (Intimations of the Deserts) in 1995. His Second collection Mosafer Fil-Qefar (Wastefarer) appeared in 2004. He is a member of the Writers Association of Kuwait.  He is a correspondent member of the Arabic Language Academy in Damascus.  He is a member of the Board of Trustees of the “Arab Thought Foundation” and one of its founders. He is a member of the Fez Syes Cultural Society in Morocco. He delivered many lectures and participated in a great number of seminars.

His efforts are in various fields. He established and fully financed:-