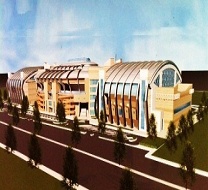 Project Brief
The Public Authority for Youth and Sports (PAYS) has signed deal to build an indoor Olympic Stadium Complex for basketball and volleyball in Sabah Al-Salem. The project name refers to a very important person in the history of Kuwait, the late Amir of Kuwait, Sheikh Saad Al-Abdullah Al-Sabah, who had contributed immensely towards development of Kuwait. Being the first of its kind project, it is hoped to have a great impact on Kuwaiti sport, also giving an opportunity to Kuwait to host regional and international sport events.

The two-floor complex will span an area of 19,000m2, apart from 9000m2 of parking space. It will include a primary stadium, with seating capacity of 5000, two secondary halls with 1840 seats each.

Located along the Sixth Ring Road, the net cost of the facility is estimated to be KD15,766,000. The project will be implemented by the Kuwait Building House Company, together with Bukahmseen House of Engineering Consultation, and will take 30 months for completion.